PREVIOUSLY
I just joined an ongoing open table DCC campaign called "The Cradle Valley". I rolled up two characters, a knight (insane stats) and a commoner. I arrived during some kind of respite between two assault during a siege led by a group of lords against an evil undead keep.

I played this game listening to Dungeon Synth since I have less things to think about as a player. Very good mix.

PARTICIPANTS
DCC is complicated because there are a lot of characters, so I'll just go with participants:


PLAY REPORT
Last time (I wasn't there) they conquered a wraith and stole his magic sword which was (mostly) exorcised in a skirmish beside the siege itself. So we started by settling who should get it.

My knight suggested a joust and joust there was, in a tournement format as four different character wanted the swords. As a lord I was the arbiter. The first bout was a couple of jousting and then a duel on the ground. In ended with an archery competition because the two remaining character were cousins and didn't want to shed blood (which my character thought was the right choice). In the end, the winner, out of an act of camaradeship, gave it to the other one. The sword still felt cursed and strange in the hand of Brutus's Victor character.

Then we moved on behind the battering ram, told the guards to stay in their positon (they wanted to join us inside but the Lord Forax had told them to guard the place). We basically had three choices: in the inner court (nobody went there yet, so much chance for loot), the left side (where the Lord went with his force) and the right side. We decided the inner court for both loot and behind more nearby the Lord. Didn't want to go completely to the other side.

In the courtyard we saw a fountain, remnants of a pagan temple and ruins with various shadows moving; we settled on them being ghosts and therefore too dangerous to meddle with. We moved to the other side where the main gate was: more shadowy figures, reddish this time. Brutus's Victor, who now had the sword, felt weird about it. But more importantly, he was drawn to the fountain, to drink it. Both the cleric of SGM and Centwine weren't sure about that.

Before it could be settled, we heard noise in nearby bushes and were alerted to the presence of something. We raised our weapons and Bres (SGM) shot an arrow to see what was in there. The bow shot was a critical and the bush stopped. We tried moving forward towards the bush and received both javelin and arrow shot from ramparts up there. Luckly for us, there was still a protection against missile around the area to protect advancing troops. 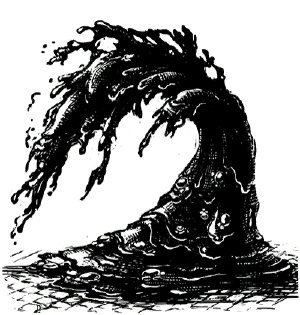 In the bush we found a bunch of leafy creatures, while we saw oozes come out of the ground further east. We quickly cut to pieces the leafy creatures and then had to deal with oozes. They prooved an easy fight, but a long one because of their ability to separate after being attacked. We also got ambushed by an extra leafy dude.

The man with the cursed sword approached the strange fountain to the northeast and discovered to everyone surprise that it was actually inhabited by a water spirit, a female naiad. She accused us of devivering evil to her domain. Lord Centwine (my knight) wanted none of it: some naked naiad in a pool within an evil domain had nothing to say regarding evil being brought to her. We were here to cleanse it !

She reveals that the evil she is speaking about is none other than Victor and his sword. Lord Centwine doesn't know anything about the sword, but at the very least the bearer, Victor, has fought evil (or at least acknolwedgedly did it), so again, he doesn't care about the naiad. Yet she proposed to dispose of the evil sword for them: if the sword IS evil, the man should consider it.

Victor decided to leave the premises and not give away its sword. "Greed" thought Centwine, but it was not his to judge: he is not the arbiter of those lands and he has no motive to take rightfully what belongs to a man. Yet another party companion, Elcmar (SGM) tried to tackle the man, to no success. Centwine decided to intervene and separate the brawl: there was a war to be fought first. If Lord Farox wanted to judge the evil sword within his land, that what his right, not ours.

There was much discussion on the sword, evil and what was needed to be done. In the end, a decision was taken: the naiad was probably evil herself, and not to be trusted. So the best thing to do was to keep on and fight the war.

But we'll have to know the remainder next time, because for now we went back towards the wall to get some refreshment and reinforcements...

AFTERMATH
Some bruses here and there, renewed friendship, all is good. No loot sadly, minimal XP.

TLDR & COMMENTS
In a sentence, what happened: Crits and fumbles. No joke we must have rolled about 20 crits and 30 1s (fumbles or crits/fumbles results of 1) throughout the game (couple of hours), with absolutely no exageration. I never saw this in my life. It was unbelievable.

The game itself: we settled a dispute on a sword, assaulted the inner court, again had a dispute over the sword because of an evil water spirit, and then stopped the game.

What impact all of this will have: To be honest, I'm unsure at this point since this campaign is new to me.

What I take from this:
We had load of fun (well I had). Not a lot happened, but that's not why we play.

Contrary to my initial belief, DCC isn't too bad. It's definitively not OSR (both in gameplay and compatibility), and it has a lot of complicated moving parts, but it still has some good things going on. Some choice of gameplay mechanic are strange. For example, it ranges longbow as having less range (which I didn't find explicitely told in what measure it was, but I might just have missed it since the book is huge) than the crossbow. Or for example, the good old XP for kill, which makes some situation look weird because it's better to kill stuff and to go for the objective.

Overall, I feel the group of junk characters is less clear than having one main PC go out with hirelings and retainers. I still prefer the OD&D way. That being said, it does create a more "lively" and "realistic" environment. OD&D is more wargaming on that aspect (which I like so it's not a big deal). I wasn't really used to this, so my second character Oswin was more or less just a hireling in terms of game impact.

Also the system in general seemed to be a lot of work for the DM (many tables and subtables with a bunch of rules, as per 3.5 and so on). In terms of "modern" RPGs out there, it's definitively a nice one.
Libellés : DCC play report scribe's work 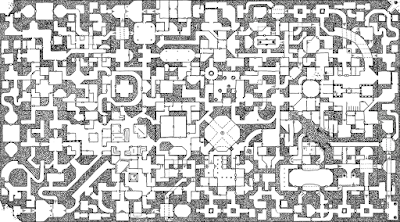 This blog will be the main platform to discuss OD&D, RPGs and more.
Picture is from an unknown source (if people know where/who/what, please tell me so I can credit), blog title is partly from ChicagoWiz's Games blogpost "Blast from the Past! My Simple OD&D/AD&D Psionics Rules" and my love from psionics in general.
Finally, this blog is for everyone to discuss. Keep in mind that I am a Christian and I will not tolerate some undesirable attitude.